Yes it did, one day it 70 degrees and the forest is prepping for babies and poof its 32 and snow…. It did put a slow down on the feeding frenzy from the Hawk and Eagle. I’m pretty sure they are feeding babies now so they are staying closer to their nest. Or it could be I now have a bigger visitor.  I have a Great Horned Owl nearby and his calls are echoing through the forest, it is really cool but wow does the forest get really quiet.

We were working on the front yard which has a couple older Evergreens when we noticed up just a couple of branches tucked in tight was a huge nest,  its Harriet the Crows nest!!! It is really big but low,  I see her building another nest a bit farther out and I am beginning to think its a decoy nest, so I leave it alone and just watch her,  I don’t want to give it away, it looks like its been there awhile we just couldn’t see it.

Woody and Momma have a place very close and just yesterday I noticed they are not coming in together anymore, its one at a time lol.

Now the other cool part right now is Buster and Tippy the Douglas squirrels. I’ve written before that Buster had babies in a nest box we have high on the shed.  It’s tough to get to as it was meant for birds but we seen Buster drop from the roof of the shed landing atop the house and remodel the inside for her liking. Then she comes out and has to dive over to a hedge to get down lol . Last time she had the babies and then soon after we seen her taking each pink little bundle out and moving to new digs in the forest.  So we call it the Maternity Ward now and surprise she is doing it again 🙂 I am so excited.

As cool as that is little Tippy started acting strange and collecting stuffing when I notice she is making a home in the house I have just sitting above the Frog pond. Well silly me I know it’s not secure so I tried to sneak over and put in some screws by hand that would keep in from sliding and a simple bungee to hold it tight.  LOL Tippy came up to inspect it and I am not sure yet if she dropped the project or waiting for baby time. My guess is she will still use it but she doesn’t like the bungee haha. 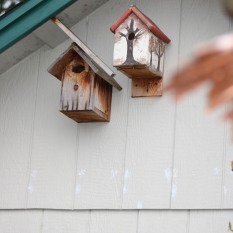 Another big wind storm is set for tomorrow so today I will secure it better, I want the babies to make it.  I’m curious if it’s another Maternity ward and then she moves them to the forest again,  but what a privilege that she trust me being so close. 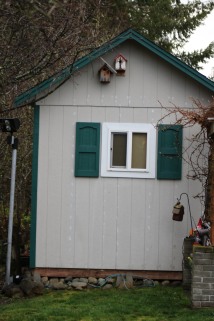 This is showing you how far a jump she takes,  she stays in the wood house on the left and comes out jumps across the that climbing hydrangea, we tried to add a stick but that didn’t work lol.

This site uses Akismet to reduce spam. Learn how your comment data is processed.