Good Morning,  I have written before about my silly daily routine with my outdoor nature buddies, and recently I have been battling the Hawks. So each morning now I will sit out back since Coop is now hiding here.  I’m learning the calls the animals are making to indicate to each other just what predator is coming. As I sat there quietly behind a bamboo fence I use to stop the fly and grabs the Stellar Jays began to squawk along with the Crows. But the grey squirrel crept up the tree branch above me and made a sound I havent heard before. I thought aha! that hawk must be right on the other side,  so I quietly get up to peek over the fence (sense my only method of distraction right now is to scare him off) and Surprise..Wiley Coyote was right there and lucky for me it took him a second to figure out the head that just appeared was me.  I scared him good !!! I have to,  it is just to close to my back yard and I have little dogs so I have to set boundaries. Sadly again the forest around us is going down at alarming rates and our nature animals are having a serious homeless issue !!!!Where do we expect them to go ??

So far Woody and Momma are unable to return, I can hear them calling out there so I know they are still around,  I am guessing its to risky right now and will return when coverage is better. But also it could be that thier  homes are gone,  I am seeing such old growth logs heading to mills that it’s probably gotten to them too.

I have Northern Flying Squirrels 🙂 they are nocturnal and now that my cameras are up I caught activity that I thought was a rat but nope its a flying squirrel and they are super small and cute. Big eyes and they look hilarious on nightcam.   I named him Zippy of course and he is a lot like a douglas squirrel, how he sits and holds his food and then zoom he is in the tree.  So fun to see. 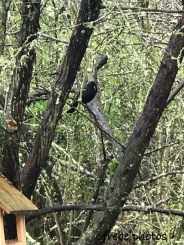 The red-winged Blackbird has returned also,  its kinda early to have all these spring sounds and I am beginning to prepare for an early spring..

Gotta get ready for our next storm, more later.

This site uses Akismet to reduce spam. Learn how your comment data is processed.